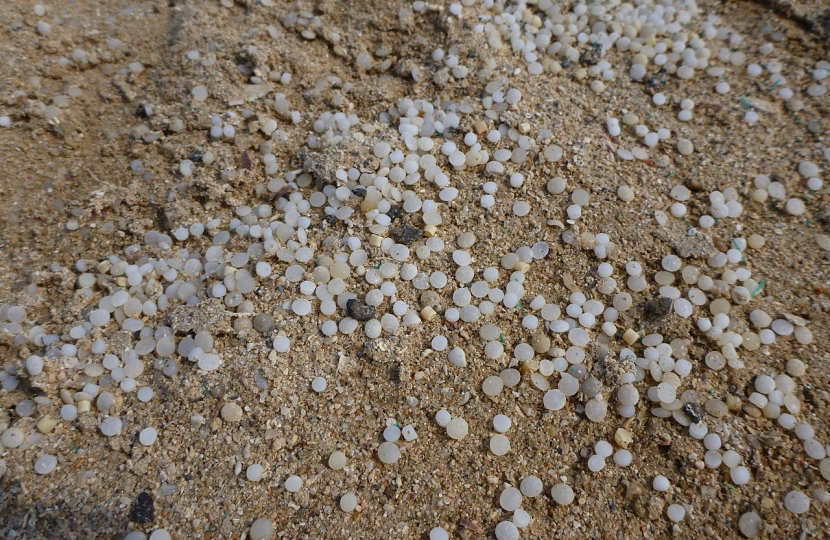 Clear, clean waters teeming with wildlife in a healthy habitat. Sadly that is not the reality where our precious marine habitat is concerned across vast tracts of the globe.

Our marine environment is now heavily polluted with plastics as a direct result of the actions of mankind. Plastics have become an inextricable part of our lives with quantities produced ever increasing.  For example in the UK alone production increased   38% between 2004 and 2014.

It’s not just the visible plastic bags, bottles and fishing detritus (such as discarded ropes and lines) that are polluting our oceans but the less obvious litter of tiny plastic particles, referred to as micro beads, less than 5mm in size, which are presenting a real danger to shell fish that are ingesting them and fish that are mistaking them for food. Recent studies are suggesting that this could represent a health threat to humans as a result of eating the fish. One study revealed that in 2009 micro-plastics were found in 36.5% of fish caught by trawlers in the English Channel.

Micro beads are mini balls of polyethylene and other plastics derived from petrochemicals including propylene and polystyrene.  They are used in a wide range of cosmetic products including face washes, exfoliators, show gels, whitening toothpaste as well as abrasive household cleaning products. Synthetic clothing also contains fibres of micro plastics.

The danger presents itself because once used and swilled off these products disappear down the drain and are so tiny they are not filtered out during our water cleaning processes and consequently end up in the ocean.

Estimating the toxicity of micro-plastics is complex and the full dangers to human health are not fully quantified yet but studies have revealed that these plastics are entering the food chain and the full impact of these materials in hard to measure. Small particles of plastics have been found in seabirds, fish and whales which swallow the materials but cannot digest them, leading to build-up in their digestive tracts. For the first time, however, scientists have demonstrated that fish exposed to such materials during their development show stunted growth and increased mortality rates, as well as changed behaviour that could endanger their survival by reducing rates of hatching and development to maturity.(Study published in Science – 3rd June 2016/ Micro-plastic’s Triple Threat)

Some fifth of micro beads are used in the cosmetics industry and this surely is one area that could be targeted relatively simply in order to begin to reduce the quantity of these plastics entering the marine habitat.

The United States of America and Canada have already legislated to prohibit the production or use of micro-plastics. The EU are making steps in this direction by banning micro beads from cosmetic products bearing the EU eco-label in 2015 but it needs to go further. The UK Government has indicated that it is willing to implement unilateral laws to ban micro beads. I am pressing for further action to resolve this deleterious situation encouraged by the positive effect government led action has had on reducing the quantity of plastic bags now being disposed of many of which have ended up in the sea.

It is encouraging that 25 UK companies have already either eradicated micro beads from their products or signalled their intention to do so. However there is still a long way to go.

Ask about the products you use to find our whether they contain micro-beads. Consumer pressure is powerful in encouraging businesses to change their ingredients.

Lead by example and opt for cosmetic products that do not contain micro beads.

I have started a twitter campaign to question products and to highlight those which include microbeads but also to praise those companies, for example Spezia, a Cornish based company that use only natural ingredients in their exfoliators. Do join in my search to name, shame, and praise!

Greenpeace launched a campaign against microbeads earlier this year (to read all about it click HERE) and the Environmental Audit Select Committee, of which I am a member is currently holding an inquiry into the Environmental Impact of Micro-Plastics.

On May 26th I called on the Deputy Leader of the House to hold a debate on micro beads and the importance of this serious issue was acknowledged.

Having fought a yearlong campaign to highlight the damaging effect of micro plastics on our marine environment I am delighted that Environment Secretary Andrea Leadsom has listened to my call for a ban on these damaging, miniscule micro beads in cosmetics and has announced plans to ban the sale and manufacture of cosmetics and personal care products containing them.

Hundreds of thousands of these tiny plastic beads wash down the drain every time we take a shower, wash our hair, or clean our teeth using a product containing them.  Less than 5 mm in size these plastic micro beads cannot be filtered out by water companies and ultimately end up in the ocean where they are ingested by fish and shellfish. Research indicates that this may have a deleterious effect on their reproduction not to mention the potential knock on impact on humans ingesting fish and shellfish.  Eat 6 oysters, for example and you have ingested 50 micro beads.

As well as running a social media campaign encouraging consumers to seek out micro bead free alternatives and calling for a ban on micro plastics I also took part in the Environmental Audit Select Committee inquiry into the impact of micro beads which has recently published its conclusion calling for a ban. It was this pressure, together with that of many environmental organisations and other likeminded individuals that convinced the Secretary of State to take action and I welcome it.

A consultation will launched later this year to establish how and when a ban could be introduced, aiming to change legislation next year.  At the same time evidence will be gathered on the extent of the environmental impacts of microbeads found elsewhere, such as in household and industrial cleaning products, before considering what else might be done in future to tackle other plastics, for example microfibers in clothing which also enter the marine environment and are not filtered out by washing machines or water companies.

Whilst 25 UK cosmetics and toiletries companies, such as Unilever and Waitrose are adopting a voluntary phase out a legislative ban will tackle inconsistency and stop new products containing micro plastics from being sold in the UK.

Manufacturers are exploring natural alternatives, including nut shells, salt and sugar, which have the same exfoliating properties but do not pose a threat to the environment.

The ban follows the successful introduction of the 5p plastic carrier bag charge which has led to six billion fewer bags issued this year and I am delighted that it is a really positive step towards tackling plastic in our oceans.

I am delighted that the Government is making progress on tackling plastics in the ocean and I’m pleased that my pressure on microbeads has resulted in Mr Gove confirming legislation will be introduced this year to ban the sale and manufacture of microbeads in cosmetics and personal care products: https://www.gov.uk/government/news/environment-secretary-pledges-action-on-ocean-plastics

In England, the ban on manufacture applied from 9 January 2018, and a ban on sale will follow later in the year; the Devolved Administrations are taking similar measures. Ministers will also be working with the Hazardous Substances Advisory Committee to review evidence about solid plastic particles in other products, and their likelihood of entering the marine environment. I have been assured that they will review the position in the light of the Committee's advice.

Global action is needed on this issue so I am pleased to say that the UK, along with several of our neighbours, is party to an organisation known as the Oslo and Paris Convention for the Protection of the North East Atlantic (OSPAR), which is taking international action on microplastics. The Government has said it will share the results of its consultation with OSPAR and continue to support its work.

I understand that manufacturers are exploring natural alternatives to plastic microbeads, including nut shells, salt and sugar. These have the same exfoliating properties but do not threaten the environment, so the products that contain them should perform just as well.

More in the News