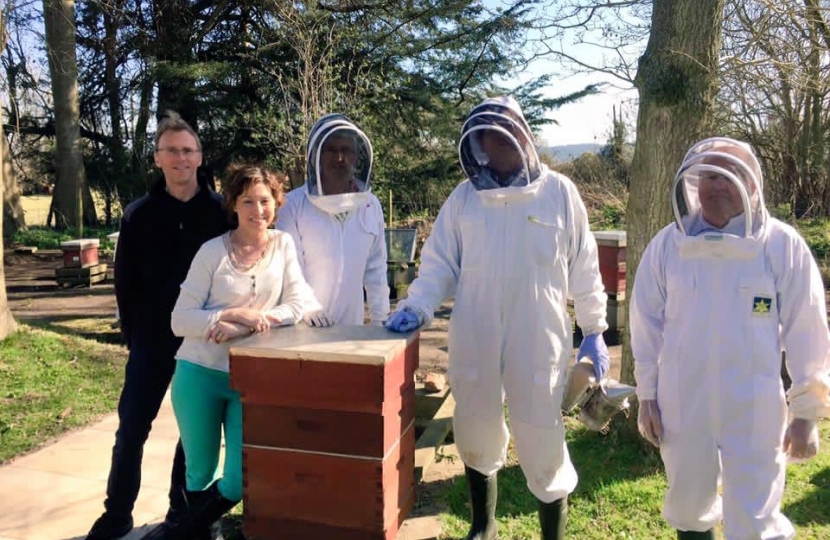 Bee keepers in Taunton Deane are buzzing with the news that proposals have been put forward to restrict the use of damaging neonicotinoid chemicals due to their harmful effect on bees and pollinators. Environment Secretary, Michael Gove made the announcement this week after consideration of new scientific evidence that has recently come to light.

The news has been welcomed by Taunton MP, Rebecca Pow who has highlighted the need to care for our bee population since her election in 2015. As a former garden journalist and with a farming background she is only too aware of their importance:

‘Bees and other pollinators play a crucial role in pollinating our crops, contributing an estimated £400- £680m to productivity. I’ve met with many groups of bee keepers locally including the Taunton and District Division of Somerset Bee Keepers whom I met at Heatherton Park in Wellington, I am delighted that Michael Gove has taken this issue seriously, referred to the scientific evidence and the views of my local bee keepers and other concerned individuals and is introducing this change. If we are serious about leaving the environment in a better place than we found it bees and other insects need to be at the heart of decision making.’

‘It is important however that we work with our farmers to ensure they can produce healthy food sustainably and there may be a need for some minor exemptions for particular niche non flowering crops and I will be meeting with them to understand any concerns they have.’

Setting out the UK’s position, the Secretary of State said the UK supports further restrictions on the use of these pesticides. Unless the scientific evidence changes, the government will maintain these increased restrictions post-Brexit.

“I have set out our vision for a Green Brexit in which environmental standards are not only maintained but enhanced. I’ve always been clear I will be led by the science on this matter. The weight of evidence now shows the risks neonicotinoids pose to our environment, particularly to the bees and other pollinators which play such a key part in our £100bn food industry, is greater than previously understood. I believe this justifies further restrictions on their use. We cannot afford to put our pollinator populations at risk.”

Since December 2013, the EU has banned the use of three neonicotinoids – Clothianidin, Imidacloprid and Thiamethoxam – on a number of crops attractive to bees, such as oilseed rape.

The European Commission has proposed restricting the same three neonicotinoids to only allow their use on plants in glasshouses. Currently, their use is banned for oilseed rape, spring cereals and sprays for winter cereals, but they can be used to treat sugar beet and as seed treatments for winter cereals. Should this proposal be adopted, the UK would have the right to consider emergency authorisations. This would only be done in exceptional circumstances where there is a real need for the products and the risk to bees and other pollinators is sufficiently low.

Caring for Our Environment

I have always prided myself on being Conservative Member of Parliament with a very prominent agricultural and green streak running through my work. It is become increasingly evident that the environment and natural world we live in is beginning to dictate more and more of our policy decisions.