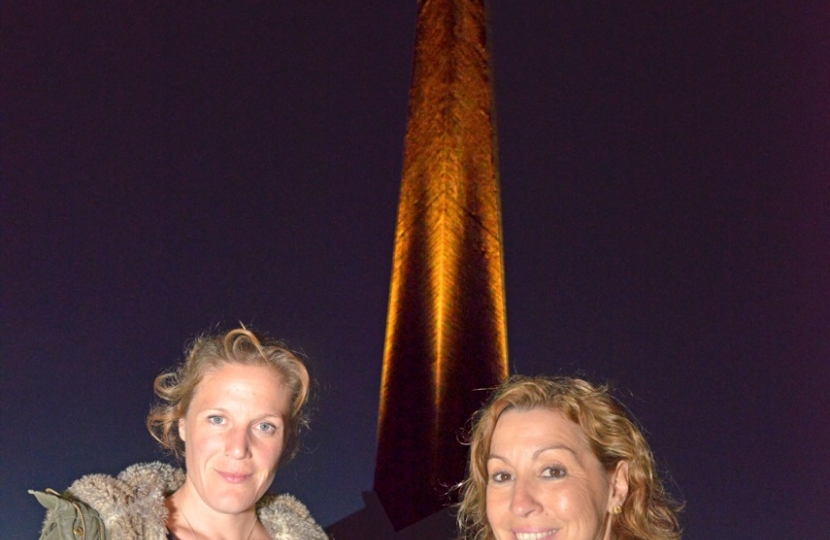 Over 100 people joined the commemoration at Wellington Monument last night (Thursday 19 June) as the lights were switched on to mark 200 years since the Duke of Wellington’s victory at the Battle of Waterloo.

The battle in Belgium was a decisive moment in history, as the defeat of Napoleon brought the start of a new era of relative peace and prosperity in Europe. The Wellington Monument, on the top of the Blackdown Hills, was built as a tribute to the Duke’s success and is the tallest three-sided obelisk in the world.

The monument was funded through public subscription with the foundation stone being laid in 1817. Work paused when the money ran out and the Duke of Wellington fell out of favour, but a renewed determination on his death saw building work completed in 1853.

Helen Sharp, Project Manager at the National Trust said: ‘We’re thrilled to have been able to mark the anniversary in this way. We weren’t expecting such a crowd, but the atmosphere was great and there was even an impromptu countdown.’

Rebecca Pow, MP for Taunton Deane was also there to see the lights switched on. She said: ‘‘It was a real surprise to see so many people gathering spontaneously for the light up,’ said Rebecca Pow, MP, ‘ this had not been promoted as a public event but illustrates the strength of feeling locally for this much loved icon. I am now working with the National Trust and hope to meet with local groups too to consider the potential for restoring the monument. It is such a significant landmark which marks the gateway to the South West that I feel very strongly that it should be saved. Community involvement would be key and there could be many local benefits for Wellington and the surrounding areas. ‘

The National Trust is currently undertaking feasibility work to establish the exact issues facing the structure of the monument and will inform a long-term plan to secure the building for future generations.