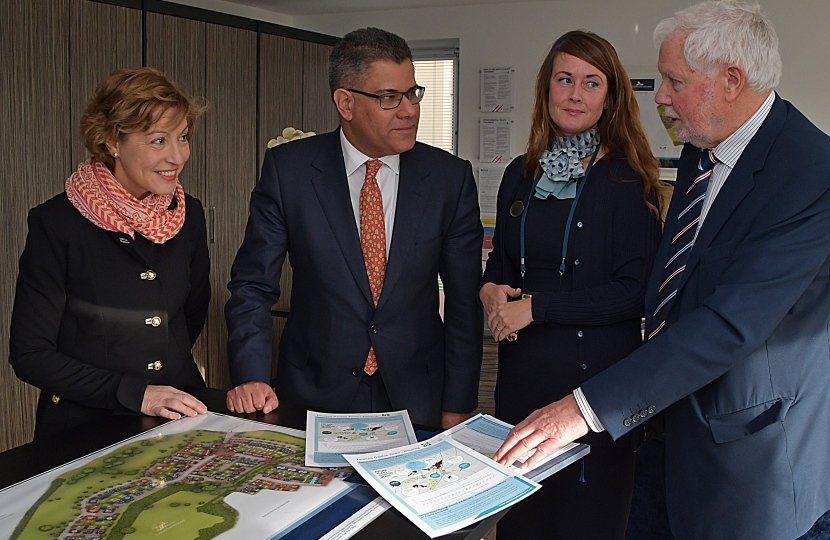 Residents of Staplegrove in Taunton had the opportunity to meet with Housing Minister Alok Sharma when Rebecca Pow MP invited him to discuss building in the Garden Town.

Rebecca wanted the Minister to gain an insight into planned projects for Taunton as the town expands to cater for projected population increases.

The Minister was keen to learn from developers what obstacles are getting in the way of delivering suitable housing, and was pleased to learn that the 25% affordable homes was being achieved in Taunton Deane, as well as there being a commitment from Taunton Deane Borough Council to build new affordable homes on Council-owned land. The council has provided over 1000 affordable homes during the past five years (representing 27% of all new dwellings.)

Rebecca said: “This was a most worthwhile visit and I was pleased to give the Minister a tour of the area to give him a real impression of the progress being made here. He met developers, planners, the garden town team, council leaders and most importantly local people.

“Everyone wants a home of their own which is why this Government commitment to build more houses is to be commended. But as I have said repeatedly in parliament, and notably in my recent budget speech, we must build homes that are good places to live and that form communities. Crucially developments must have the right infrastructure, and in particular, roads.

“In this respect I was especially pleased to take the Minister to meet residents at Staplegrove to make the case for funding for the much needed spine road through the 1600 house development recently given planning permission. A bid has been made for this to the Housing Infrastructure Fund and following my own strong representations and those from the local representatives including Cllr Rod Williams, the Minister was left in no uncertain terms about the need for this road.”