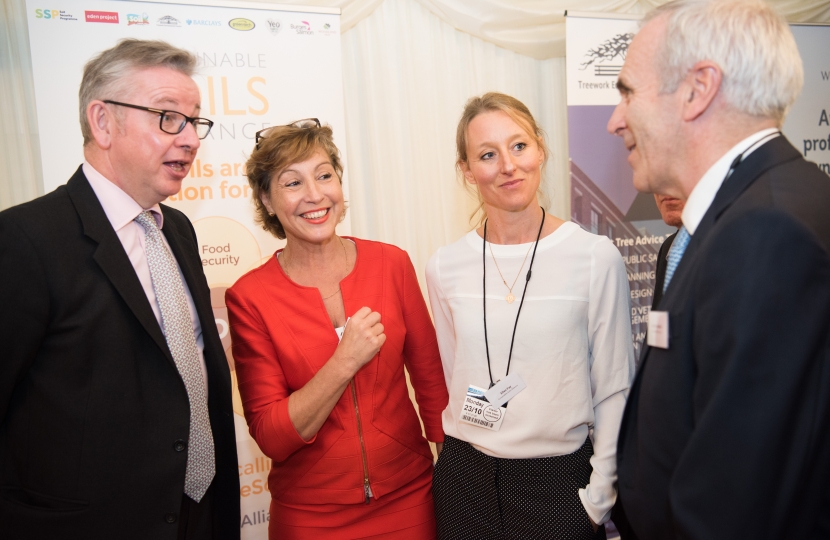 Over 200 people joined Taunton Deane MP Rebecca Pow and the Defra Secretary of State, Michael Gove, in Parliament this week for the launch the Sustainable Soils Alliance (SSA). The SSA aims to unite stakeholders in soil health to create a forum to influence positive change, identify beneficial policy principles and create the frameworks that will support the development of healthy soil for future generations.

As a farmer’s daughter and having taken part in the Environmental Audit Committee Inquiry into soil health and led the first debate in Parliament on soil, Rebecca is known for championing this under-recognized resource that is in crisis.

Michel Gove told the parliamentary launch of the Sustainable Soils Alliance (SSA) that “we have encouraged a type of farming which has damaged the earth. Countries can withstand coups d’état, wars and conflict, even leaving the EU, but no country can withstand the loss of its soil and fertility.”

The UK is 30 to 40 years away from “the fundamental eradication of soil fertility” in parts of the country, the environment secretary warned the crowd of delegates from political, corporate, NGO, agricultural, academic and environmental backgrounds.

The event, as masterminded by founder of Tree Aid and the Ancient Tree Forum, Neville Fey featured influential speakers from a vast range of sectors, including: Baroness Young – Chair of the Woodland Trust, Sir Tim Smit – Co-founder of the Eden Project, Prof. Chris Collins – Coordinator of the Soil Security Programme, Helen Browning OBE – CEO of the Soil Association and John Sauven – CEO of Greenpeace. All joined together in a united call to action on restoring the health of our soils.

“The Parliamentary launch of the Sustainable Soils Alliance was an absolute triumph. A remarkable two hundred people, from scientists to NGOs, farmers, environmental groups and academics were brought together through the recognition that our soils have for too long been neglected and the determination that through a joint approach we can push for a positive change in the way our soils are managed so that the soil crisis might be reversed.

I have long pushed for soil to rise up the agenda, it is as important as the air we breathe and the water we drink and took part in a soil inquiry and the first debate on soil ever held in Parliament. It is vital that we take action to ensure that soil is preserved and protected in line with our other vital resources. I was delighted that Secretary of State Michael Gove was able to attend the event. He was in listening mode and gave some positive indications that soil will now start to get the attention it deserves from this Government and I shall continue to work with The Sustainable Soil Alliance to ensure this happens.”

“The mission of the Sustainable Soils Alliance (SSA) is to bring soils back to health within one generation.

Our parliamentary launch was a huge success. We will present the ‘voice’ of the reception expressed in the huge volume of responses in the coming weeks. We went to the event knowing there was an immense amount of interest and information and data supporting the fact that our soils are in crisis. The launch confirmed how extensive is the problem and the enormous amount of will from working scientists and farmers, conservationists and land managers and politicians, all the way up to the Secretary of State. It confirmed too, that the timing is utterly critical to embark upon action to for soil recovery.

There is a huge variety of policy mechanisms and opportunities to address this problem, from measurement, regulation and incentives, training, to entirely rethinking the career path for the noble profession of conservation agriculture.

The combination of having this level of understanding, a supportive Secretary of State and the momentum provided by Brexit and the new environment strategy means the stars are aligning for the issue of soil health to be resolved.

We look forward to our role as the catalyst to unite and align across the range of interested and impassioned stakeholders to make the change we all need to achieve healthy, sustainably nurtured and managed soils, and giving soil the level of importance and protection it deserves in policy, along with air and water.”