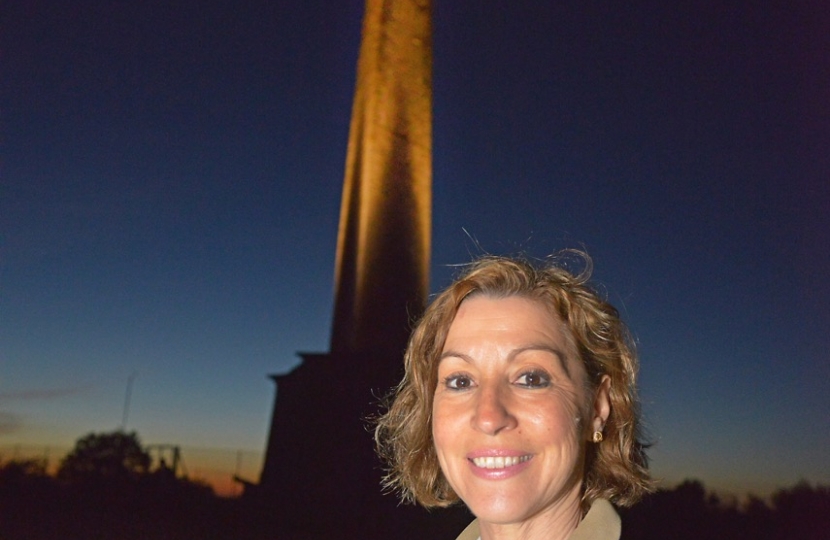 There can barely be anyone locally that is not aware of the iconic Wellington Monument standing tall on the Blackdown Hill escarpment and clearly visible from the M5 in Somerset. It is not just an eye catching and a loved symbol for Wellington and Taunton Deane it is also a landmark for the 21 million vehicles passing it on the M5 every year much like Stonehenge or the Angel of the North. It is even more noteworthy though commemorating as it does the remarkable success achieved by the Duke of Wellington at the Battle of Waterloo in 1815. Wellington is considered one of our top 3 greatest war heroes and significantly for the area, he took his name, from the town of Wellington. In recognition of Wellingtons’ formidable success at Waterloo local people determined to build a Monument although it took a further two years before the actual foundation stone was laid (1817) meaning that the 200th anniversary of the commencement of the building of the Monument is in fact next October 2017. It is one of just a handful of structures built to commemorate Wellington and is unusual being in a rural as opposed to an urban setting. Not only is the structure of historic importance it is also considered of international architectural importance being the tallest three-sided obelisk in the world. It is also the second tallest obelisk in Europe and the fifth tallest in the world. However, this renowned and much revered structure, is in a desperate state of repair and in dire need of restoration. In has been fenced off and closed to the public, (no longer can the 232 steps inside be climbed) since 2008 because of the dangers of falling masonry. Despite this over 40,000 people still visit the attractive site each year including a high number of people with physical and learning disabilities and their carers, partly owing to the ease of access and of course the beauty of the location. Traditionally, as many will recall, the obelisk was also lit nightly, serving as a treasured beacon for miles around but sadly owing to its precarious predicament this no longer occurs regularly. However, as a one off event, together with the National Trust, who now own the Monument, we instigated a special one-off light up last year to mark the 200th anniversary of the Battle of Waterloo last year. This came hot on the heels of my referring to the structure in the Chamber of the House of Commons which attracted much press coverage. To the amazement of both the National Trust and I, quite spontaneously, over a hundred people turned up in the dark to witness this event which is some indication of the esteem in which the Monument is held. It was this that really galvanised me into action to make a case for the Monuments’ restoration. To this end I have launched a petition to raise awareness and to demonstrate the strength of public support for a possible restoration project to potential funders. Realistically the National Trust has many demands on its resources and this would need to be a multi-pronged approach. The Trust has already made progress though in conducting comprehensive feasibility surveys to determine what work needs to be carried out to save the structure including a Ground Penetrating Radar Survey (GPR), wind and movement measurement, and an exterior visual survey and this is vital in terms of considering a way forward. There is a long road to travel but demonstrating local support is a positive first step. From this could stem a range of community involvement through schools, local organisations, and the town council and so on. Restoring this revered symbol would not only be wonderful for Wellington but could also make an important contribution to the ongoing development of the wider South West, located as it is in such a strategic location marking the gateway to the region. To sign Rebecca’s petition please visit the Wellington Weekly offices at 26 High Street, Wellington, TA21 8RA.