How Laundry is Contributing to Plastic Pollution 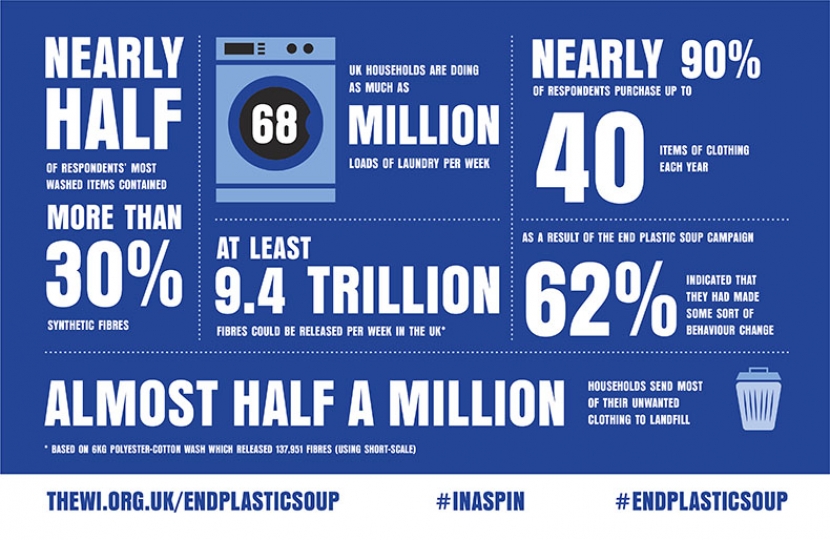 Recently a group of people with young children came to see me in Taunton so desperate about the dire state of our planet and their children’s futures they had set up an action group, Taunton Green Parents and, aware of my green credentials in Parliament, (and my focus on this in my previous career) they wanted to impress on me the urgency of making change.

I too feel strongly that leaving the environment better than we found it is one of the biggest issues facing us and I’ve made it a priority in Parliament whether it is tackling climate change; soil erosion; biodiversity, saving ancient woodland or addressing the big issue of plastic pollution.

I was delighted, in Westminster to be involved in bringing about the ban on micro plastics and micro beads in cosmetics and care products, this having been an issue on which I was very involved prior to my election in 2015. These miniscule plastic beads used in myriad face washes, shower gels, shampoos and so much make up we’re washing down the drain, causing untold devastation in the marine habitat. Bringing about the ban on their inclusion demonstrates what an MP can achieve. This is a positive move, but micro beads only represent 2% of plastic pollution.  So, now working collaboratively and encouraged by the public, I am focusing on reducing another kind of plastic pollution - micro fibres.  These are much smaller than micro beads (less than 5mm) and exude from our clothes every time we wash them. A worrying 9.4 trillion fibres disappear down the plug hole from the nation’s 68 million weekly loads of washing. Few washing machines can filter the fibres out so they are ending up in our precious oceans, having been captured in sewage sludge and are spread onto our land (plastic fertiliser!)

Working with the National Federation of Women’s Institutes, I am running an ‘End Plastic Soup’ campaign and have ran a number of events in Parliament to highlight the issue including bringing together specialists from the fashion industry, academics, the water industry and the washing machine industry to come up with some solutions that might influence Government policy. I believe we need a mix of voluntary action and legislation to bring about real change in the environment.  For example, many people voluntarily reduced their use of plastic carrier bags, but it was not until a 5p charge was introduced in October 2015 that the big change happened and carrier bag usage dropped by a staggering 6 billion (with most of us using on average 25 bags a year now compared to a previous average of 140.)

If you want to make a difference individually in terms of reducing micro fibres and wider issues around washing clothes, there are many things that can help: wash less frequently – only when clothes really need it. How often do you wash something that has only been worn once? Use full loads which means less friction between clothes with fewer microfibers being displaced. And wash at lower temperatures, 30 degrees means fewer CO2 emissions (with less impact on climate change.) Using an eco-washing power and no fabric conditioner will also mean less chemicals are entering our water courses. If you can ask washing machine manufacturers whether they are investing in filters that will collect micro fibres that could also bring about change.

On a wider note, your clothes buying choices will make a difference: synthetic fabrics tend to exude more microfibers that natural fabrics; buy fewer items and make them last longer so that less go to landfill. (Every second, one rubbish truck of textiles is dumped or burned, the latter exacerbating global warming.) And ask your clothing retailer what they are doing to tackle micro plastic fibres. This will send a strong message that this is something you really care about.