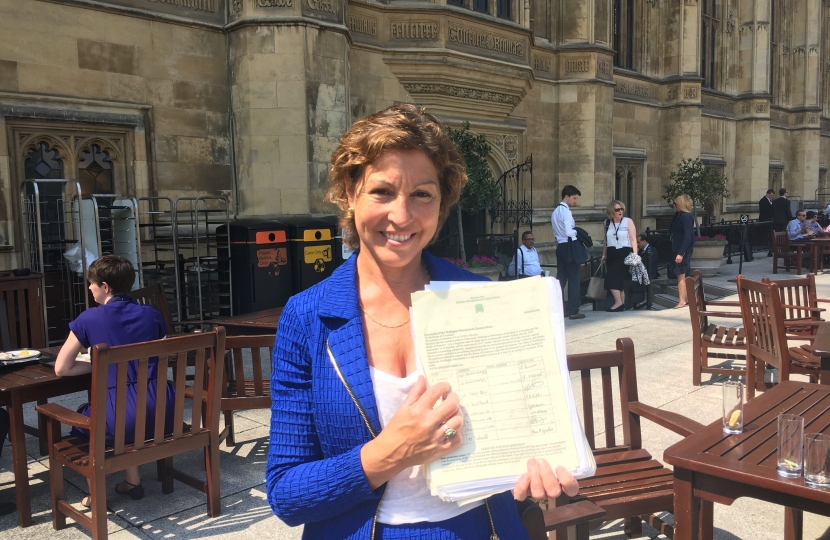 However, in recent years the structure is in an increasingly worrying state of disrepair, is closed to the public and is now only very infrequently illuminated.

Taunton Deane MP, Rebecca Pow has launched a campaign to raise the profile of the much loved Monument with the ultimate aim of raising the funds to restore it, so that once again local people can climb the structure and enjoy the glorious views from the top.

In May this year, Rebecca launched a petition to gather support from local people. The petition closed on Friday (15th July) and gathered almost 2,000 signatures. This week, Rebecca will be present the petition to the House of Commons directly.

After presentation, the petition will be printed in Hansard (the official report of the proceedings of Parliament) with the text of the public petition also being sent to the relevant Government department with subsequent observations also printed in Hansard.

Rebecca has received support from Charles Wellesley, the 9th Duke of Wellington who met with her in Westminster to discuss her campaign.

During the meeting the Duke explained more about his family’s history and their relationship to both the local area and the Monument itself. He acknowledged the special significance of the structure being one of only 3 memorials constructed to celebrate the Duke of Wellington’s importance as one of our greatest war heroes, and he singled out the uniqueness of the example in Wellington which is the tallest three sided structure in the world.

The National Trust, to whom the monument was gifted,  have spent the past twelve months doing detailed survey work, to assess the structure and to come up with a range of repair options.

Helen Sharp, Project Manager for the National Trust at Wellington Monument, says ‘we are really pleased that the Duke of Wellington has added his name to those who are keen to see the Monument repaired.  We understand just how important the Monument is to local people and are thrilled that so many have shown their support by signing the petition.  Our work to consider the future repairs is continuing and we plan to be in a position to share the next steps soon.  We’re listening closely to what people are telling us about how important the Monument is to them.’

Commenting, Rebecca said; ‘Demonstrating the greatest possible support for restoring the Wellington monument is key to making the strongest case to government and potential funders for this restoration project. I am delighted by the huge response to the petition, with hundreds of people adding their names to back this potential scheme.

There are a plethora of reasons why we should restore this much loved local feature for future generations: It’s a wonderful beacon in the area in a beautiful location and is enjoyed by thousands; it is a fitting accolade to the Duke of Wellington,  one of our 3 greatest war heroes and  commemorates his success at the Battle of Waterloo; it is of international architectural significance and is an iconic landmark signaling the gateway to the wider South West and so is recognised by millions of travellers using the M5, especially during this busy summer  period.  On all these grounds I am sure you will agree the Monument needs restoring!’