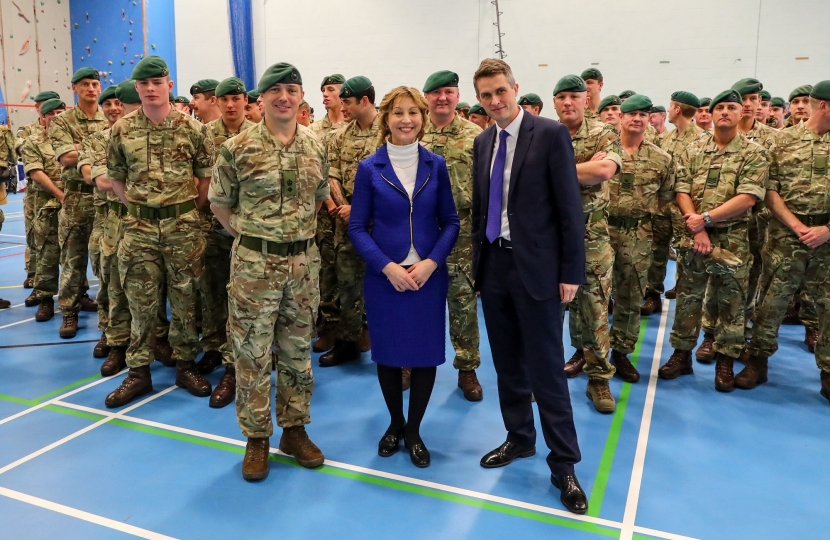 Following a focused campaign, Rebecca Pow MP for Taunton Deane achieves a remarkable U-turn on the Norton Manor Camp decision taken in 2016. Today, the MOD confirms the camp has been saved.

In a statement to the House of Commons today, Defence Minister Tobias Elwood announced that the future of 40 Commando at the Norton Manor base in Taunton is secure. After three years of uncertainty following a decision in 2016 to close the base by 2028, the MOD no longer intends to dispose of Norton Manor Camp as a result of recent assessment work as part of the Defence Estate Optimisation Programme and it will be retained for ongoing defence use.

Rebecca said: “I am absolutely thrilled that the Secretary of State has taken heed of the comprehensive case I made to keep the base open, backed up by the local community, the Council and the Marines themselves. I am delighted that the original decision to close the camp has been reversed. In my campaign I focused on the significant investment (upwards of £50 million) made to make the site fit for purpose well into the future and representing good value for the taxpayer; its location providing easy access to training areas and other defence centres and of course the contribution the Marines make to the local economy. I believe what really had an impact was getting the SofS to Norton Manor himself to see the situation on the ground. I followed this with a letter, further meetings and the presentation of my petition which demonstrated huge public support for keeping 40 Commando in Taunton.

I’d like to express sincere thanks to all those who have supported this endeavour, including the local community, the council and 40 Commando themselves. I would especially like to thank the Secretary of State for his understanding and for facilitating this turnaround. It means a great deal for the military and non-military personnel based at the camp and indeed for the whole town which has taken 40 Commando to its heart.”

Commenting on the decision, Secretary of State Gavin Williamson said: “The announcement today confirms that as a result of assessment work my Department no longer intends to close Norton Manor Camp in Taunton. I recognise the strength of feeling in the local community about Norton Manor Camp and the assiduous, determined campaign Rebecca has led to retain it. She has left no stone unturned in highlighting her case. She is a tremendous advocate for 40 Commando in her constituency and it really was her dedication to the cause that encouraged my Department to reconsider. I have made the decision to retain the camp as it has an ongoing defence use, it will offer better value for money and it better supports military capability.”